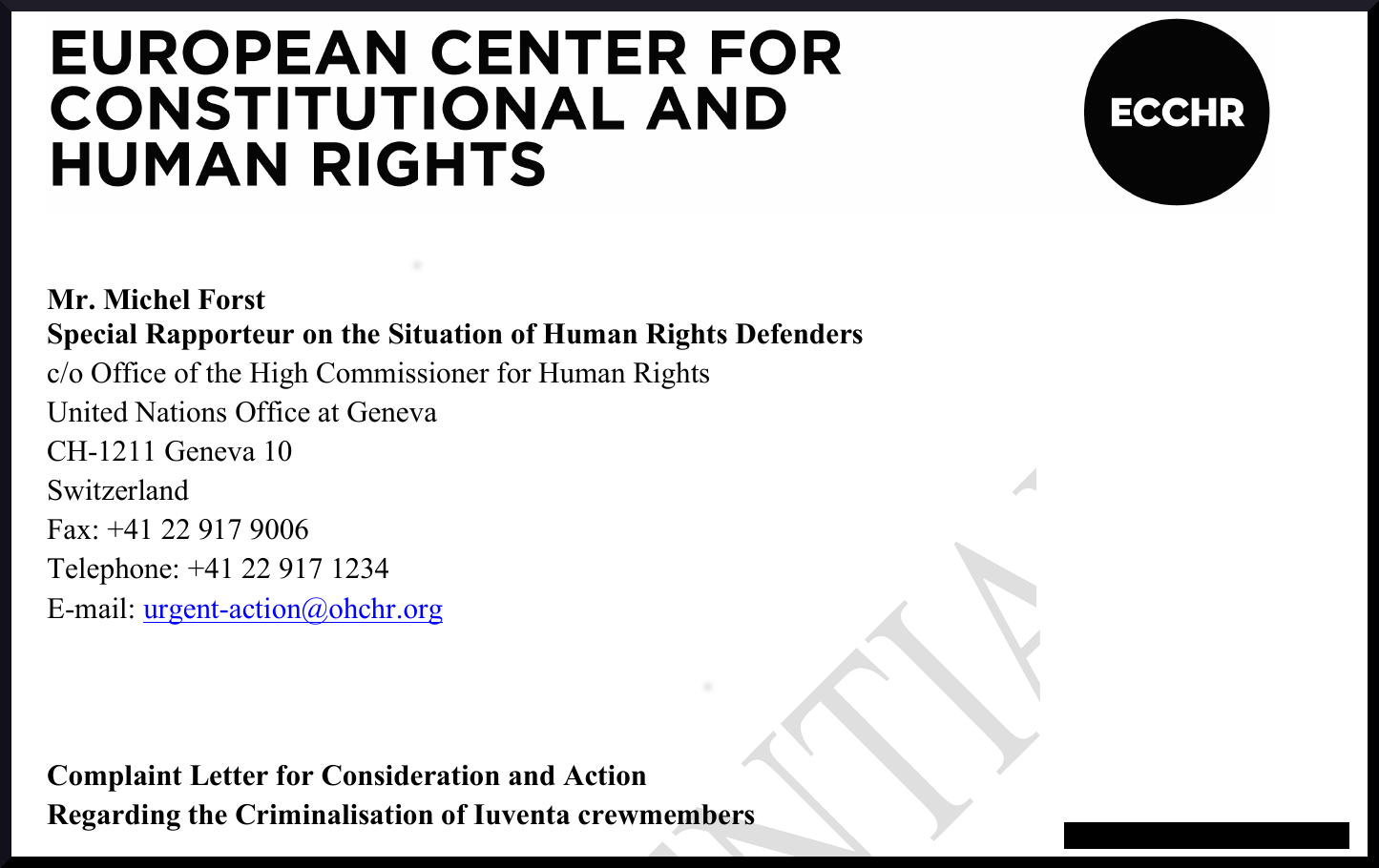 ECCHR submitted a complaint letter to the UN Special Rapporteur

The NGO ship Iuventa (owned and operated by German organization Jugend Rettet) has been rescuing refugees and migrants in the Mediterranean Sea, off the Libyan coast, thereby providing crucial aid to those abandoned by state-administered sea rescue. Between July 2016 and August 2017, the international crew rescued more than 14,000 persons in distress at sea. In August 2017, Italian authorities seized the Iuventa, thereby preventing any further rescue missions. The seizing of the Iuventawas the first episode of a veritable campaign by Italian authorities criminalizing search and rescue (SAR) missions at sea.

The accusations against SAR workers/activists are a severe attack on the work of the sea rescuers who defend fundamental rights of refugees and migrants. Therefore, in November 2019, ECCHR submitted a letter to the UN Special Rapporteur on the Situation of Human Rights Defenders, asking him to intervene in the situation in Italy. In its complaint letter ECCHR argues that the criminal investigations against the Iuventa crew and the following smear campaign by Italian authorities violate the UN Declaration on Human Rights Defenders and the International Covenant for Civil and Political Rights.

Case
Ten crew members of the rescue ship Iuventa are under criminal investigation by Italian authorities for „aiding and abetting illegal immigration.“ After a rescue mission, the Iuventa had been ordered to return to the port of Lampedusa – supposedly under a pretext. There, Italian authorities confiscated the ship. This was also the first time that the crew members became aware of the ongoing examinations against them. The investigations are directed at persons from Germany, the UK, Portugal and Spain who were working as captains, head of mission, paramedics, or rescue team members.

Legal documents concerning the case were leaked to the Italian press, including the full names of crew members. This resulted in a heavy media smear campaign, surveillance by Italian authorities, as well as threats by far-right movements against those named in the documents.

Rescue at sea is not a crime and can thus not be treated as one under international law. Nevertheless, following an increasingly strict anti-immigration policy, European states like Italy continue to criminalize people providing humanitarian aid at sea. Thereby they prevent necessary life-saving activities in defense of the human rights of migrants.

This is why ECCHR, in addition to the letter on the Iuventa case, also submitted complaint letter to the UN Special Rapporteur in January 2020 on the criminalization of the NGO Sea-Watch and one of its captains on board the Sea-Watch 3, namely Carola Rackete, and the defamation and smear campaign against her.